Theo is an ordinary, peaceful space orc. Sadly for him, he finds himself in the wrong place at the wrong time. The extraterrestrial Aztec race just lost their god and desperately needs a new one. They settle on Theo and make him their new god, granting him new abilities. However Theo soon starts to miss his adventures of an awesome space orc travelling across galaxies. Therefore, he decides to make his exit, but his escape attempt doesn’t exactly succeed. He is captured and cursed. But whoever thought that making a space orc angry would go unpunished, was wrong!

Antitheos was made during the Global Game Jam 2015 in 48 hours and a week of tweaking and bug fixing. The theme was "What do we do now?" and we decided to go for an action platformer crossbred with card game elements. The cards can change your game experience, so choose wisely as the cursed abilities grant both good and bad qualities and effects.

Through Antitheos, I wanted to create a crossbreed of a platformer and a card game, so a mix of my two very close genres. The final build could be considered a decent prototype and I would like to expand the idea in the future some more. 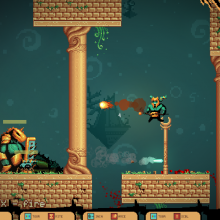 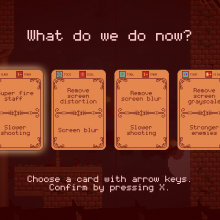 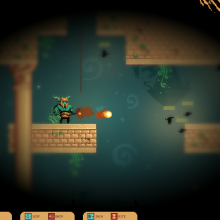 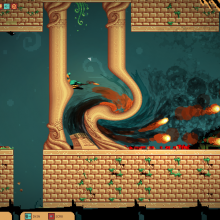