This title is a variation of the old classic „Rock, paper, scissors“, which we adapted into the form of a digital deckbuilding game. During the game the player buys new cards for his deck and decides through this simple mechanic, which of the three symbols will be the most used one. His choice can give a clue to the opponent, who can react to the player’s style and adapt to it. The different abilities of the cards also play an important role, as they bring in a bit of strategy into the classic random model.

The game was created within 72 hours during the game jam Ludum Dare 34 and due to the time restrains it’s only available in a single player mode. Though it’s main strategic aspects don’t excel without a second player, it’s still a fun little game for long moments. It exploits several design tricks that keep the experience entertaining and at the same time relies on the element of chance.

During my work on the graphics I was inspired by the popular game Hearthstone and I loosely imitated its art style. 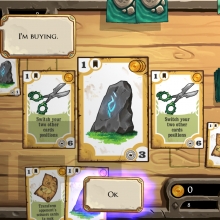